Praised for its excellent intonation and wide palette of vocal colour, Chor Leoni Men’s Choir is one of the most active amateur ensembles in North America and performs more than 35 concerts a season to over 15,000 patrons. With stylistic grace and an adventurous spirit, Vancouver’s "Singing Lions" have enriched and transformed people’s lives through singing for over twenty-five years. The choir is fortunate and privileged to sing on the unceded traditional territory of the Musqueam, Squamish and Tsleil-Waututh First Nations.

The ensemble has been honoured with many awards at the national and international level including five 1st place awards in the CBC National Radio Competition for Amateur Choirs. In July 2018 Chor Leoni competed in the Singapore International Choral Festival, won gold medals in all of their categories, and was one of eight choirs invited to sing in the Grand Prix. A few days later, the choir won gold medals and Choir Championships in both of their categories at the Bali International Choral Festival and were invited to sing in the Grand Prix. In 2012 the choir won a dozen awards at Italy’s 51st Concorso Internazionale di Canto Corale “Seghizzi,” including 1st place trophies in the 19th and 20th Century categories, two Audience Favourite awards, and second place in the competition’s Grand Prix. Chor Leoni’s Wandering Heart recording, released in 2016, has been a featured CD for Minnesota Public Radio and WFMT Chicago, and received a perfect, five-star rating from the UK’s prestigious Choir and Organ magazine.

Chor Leoni prides itself on its musical ambassadorship for Vancouver and Canada and has performed at major festivals and concert venues across Canada and the United States. Internationally, the choir has shared its music in Singapore, Bali, Italy, Croatia, Bosnia, Germany, and the Czech Republic.

Chor Leoni has been a champion of new music and has commissioned hundreds of pieces for male choir, ranging from pop and folksong arrangements to modern works. The ensemble has commissioned works by notable composers such as Ēriks Ešenvalds, Bob Chilcott, Imant Raminsh, R. Murray Schafer, Stephen Chatman, Malcolm Forsyth, Bruce Sled, Jocelyn Morlock, and Steven Smith, among others. 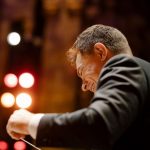 We create transformative experiences for our performers, audiences, and communities. We champion Canadian culture at home and abroad.

The Vancouver Thunderbird Chorus was the first men?s barbershop chorus established in the Vancouver area,…

Vancouver ORPHEUS Male Choir was formed in 1992 for "Men of all ages who love to sing." The Vancouver…

The soloists on Stars are Noel Hollett and Peter Joosten. Video by Phil Jack.