As the premier Niagara Region choir, Chorus Niagara draws its membership from throughout the Niagara peninsula and from as far away as Hamilton and Buffalo NY. In 1989, the NSA Board invited Robert Cooper to become conductor and, moving in a new direction, gave him complete artistic control in that capacity. Since then the Chorus has doubled its membership and established an unprecedented standard of excellence. In 1997 Chorus Niagara incorporated itself as a separate organization from the Niagara Symphony while still maintaining a satisfying professional relationship with its founder. 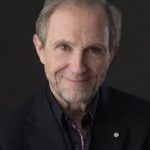 Formed in 1963 as the St. Catharines Symphony Chorus, Chorus Niagara has grown from a modest twenty-four members to its present complement of a hundred choristers. As the premier Niagara Region choir, Chorus Niagara draws its membership from throughout the Niagara peninsula and from as far away as Hamilton and Buffalo NY. In 1989, the NSA Board invited Robert Cooper to become conductor and, moving in a new direction, gave him complete artistic control in that capacity. Since then the Chorus has doubled its membership and established an unprecedented standard of excellence. In 1997 Chorus Niagara incorporated itself as a separate organization from the Niagara Symphony while still maintaining a satisfying professional relationship with its founder.

Chorus Niagara has been honoured to work with many guest conductors. During the 1998-99 season, Chorus Niagara took part in a CD recording project with John Rutter, and performed in 2004 the Canadian premiere of both Rutter’s Mass for the Children and Feel the Spirit under his baton. In 2001 Sir David Willcocks conducted Hymns for all Seasons as well as its biennial Messiah performance in 2002. In the summer of 2007, the Chorus was invited to sing Beethoven’s 9th Symphony with the Buffalo Philharmonic Orchestra and Chorus at Art Park in New York. Over the past several years Chorus Niagara has enjoyed successful collaborations with the Orpheus Choir of Toronto, London Pro Musica, Mississauga Choral Union, Portsmouth Choral Society and Orillia Cellar Singers, performing many large scale works for choir and orchestra eg: Requiems of Berlioz and Verdi, Dvorak’s Stabat Mater, and Jenkins’ The Armed Man, among others.

In May 2009 Chorus Niagara embarked on its first international tour, collaborating with the Chantry Singers in an exciting concert in Bath Abbey, England and with the Portsmouth Choral Union under the direction of Jonathan Willcocks. A second international tour was recently completed as well. The Chorus also performed and was well received by a crowd of thousands at the annual Grape and Wine Festival, and performed the Olympic Torch Song at the Olympic Torch Relay ceremony in Niagara Falls.

On Nov.13 2010 unsuspecting shoppers got a big surprise while enjoying their lunch. Over 100 chorus participants were in this awesome Christmas Flash Mob concert performing "Hallelujah". The flash mob video has received over 42.5 million views in one year. Chorus Niagara performs in Partridge Hall in the FirstOntario Performing Arts Centre in St. Catharines, and as a guest of other arts organizations including Niagara Symphony Orchestra.

Adults with a strong level of musicianship, good vocal technique and flexibility, and above all a desire to be musically challenged in an ensemble environment are invited to audition.

Interested singers are welcome to contact Chorus Niagara to arrange an individual appointment. Auditions are ongoing, with a current focus on filling our roster for the beginning of our exciting 2017-2018 concert season.

Chorus Niagara rehearses weekly from September to the end of May. Rehearsals take place on Monday evenings from 7-10 pm under the leadership of Artistic Director Robert Cooper. Additional rehearsals occur prior to our concerts and other performance appearances.

Chorus Niagara performers are encouraged to invest in their musicianship and vocal growth through personal practice, and to prepare repertoire between rehearsals as necessary. A commitment to regular attendance within our performance-oriented schedule is expected; a complete Rehearsal Schedule is available upon request.

We invite you to sing with us!

Our rehearsals are open to all and we welcome you to drop in and check us out. Rehearsals are Monday evenings from 7 until 10 p.m. at Beacon Christian School, 300 Scott Street, St. Catharines.

Choristers are all volunteers who audition annually. We attend all rehearsals and concerts, participate in fundraising, sell tickets, and use our skills to assist in the various facets of running the organization.

If interested, please contact us at [email protected] or contact our audition coordinator (Lolly Pettigrew) directly (905) 945-0364 or mailto:[email protected] Please provide some information on your vocal and choral background. We will respond to you regarding the availability of an audition time.

To be a cornerstone of the Niagara arts community through creative and passionate programs that entertain and enthrall.

Niagara’s Avanti Chamber Singers, under the direction of Dr. Rachel Rensink-Hoff, is a community-based mixed…

Originally consisting of Port Colborne residents, the membership now includes men and women from many parts…

Masterworks of Oakville Choir and Orchestra

We are a community-based group, dedicated to performing the great works of the Western Classical tradition,…