Gloria Brunensis is a women’s chamber choir, established in January 2014 by the initiative of its current conductor Natalia Chirilenco. The repertoire of Gloria Brunensis consists of a wide range of compositions that span across periods and musical genres, from polyphony to contemporary authors. It specializes in a cappella music. Despite being a young group, it has already held a number of concerts and achieved success in domestic as well as foreign choral competitions. These include a Silver Prize at the international choral competition Ave Verum in Baden, Austria, two Gold Prizes from the international competition Slovakia Cantat in Bratislava, Slovakia, and also one Gold Prize, one Silver Prize and a nomination for the Grand Prix at the international festival Mundi Cantant in Olomouc, Czechia. 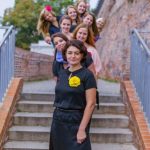 Gaudeamus is a mixed choir, founded by the Ukrainian choirmaster and conductor Alexander Vacek in 1996.