Come and Join Us

Rapidly approaching it's 150 anniversary, the "LeedsPhil" has been a mainstay of choral singing in Leeds. Even continuing to perform through two world wars. It is a semi professional auditioned choir that regularly performs with leading orchestras locally and on tour. The music director is the renowned David Hill and our choir master is Joseph Judge. We are a happy and friendly bunch and always welcome new singers, just come along to a rehearsal and give us a go.

We rehearse every Thursday evening. 7:00pm at St Georges Church. 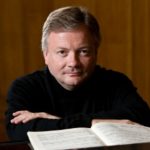 Historically from the early 18th century, Leeds was one of the main UK players in promoting and supporting large scale choral works and continues to do so to this day.

The Leeds Philharmonic Society was the natural evolution of the Leeds Amateur Vocal Society, a male voice choir of approximately 60 formed in the early 1860’s.  In 1870 it was decided to admit women to the choir and to formally rename it the Leeds Philharmonic Society.  A further amalgamation took place in 1896 with the Leeds Subscription Concerts. As well as perfroming in it's own concerts, large numbers of the choir also provided the singers for the triennial Leeds Festivals. In the 19th century, such was the pre-eminence of the chorus that for many years a contingent of anything up to 100 singers from the LPS formed the backbone of the choruses at the Three Choirs, Chester, and Norwich Festivals.

Leeds Philharmonic Chorus now comprises over 130 singing members regularly performing  at Leeds Town Hall. Performances are often jointly promoted with the Leeds International Concert Season and the BBC.  Our repertoire is extensive, combining both tradition and innovation involving a constant quest for excellence as well as enterprise.

We are always looking for new singers to continue the journey of this historic choir.

Membership cost £200 pa with discounts for students, unwaged and also in the first year. Singers should have a basic understanding of music scores. The choir performs in roughly 4 main concerts and some smaller Christmas functions each year. After sitting in on some rehearsals, if the singer wished to join then they undertake a small audition with the chorus master.  Singing something they have picked and some scales. It is not as daunting as it sounds.

Our mission is to bring the joy of choral singing to all.

We are a friendly, mixed-voice, secular choir of people who take pleasure in singing songs of joy,…

We take pleasure in singing songs of joy, struggle, liberation, celebration and peace from around the world.

Leeds Male Voice Choir is a vibrant and dynamic choir of fifty men that performs throughout Leeds and Yorkshire.