A fellowship of men who love to sing

Since 1960 the Rushmoor Male Voice Choir has been entertaining audiences with a wide-ranging repertoire, providing its services to enable local charities to raise around £10,000 every year for good causes.

Founded by Geoffrey Waller specifically to sing in the Aldershot Music Festival, approaches to local church choirs brought volunteers from many backgrounds with an odd one from here and an odd one from there, so the name "Odd Fellows" was coined and the choir is still known locally as the Rushmoor Odd Fellows Male Voice Choir. Succeeding Geoff was Colin Wilson, who developed the choir’s style over twenty years and since 2001 current Musical Director Stephen Petch has continued that development. Among other achievements, Steve has taken the choir on multiple occasions to the Royal Albert Hall as participants in the London Welsh Festival of Male Voices and to perform in Rushmoor’s twin town of Oberursel in Germany. 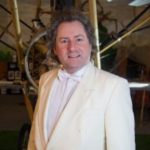 A fellowship of men who love to sing

If you love to sing then we may be the choir for you. We?re a sociable and lively group of people of all ages…