The chorus has established itself as a group of men and women from Northwest Tennessee who sing with a professional sound.  The member's and director's heart and passion to share their music is defined as "magic" by those who hear the chorus.

Headquartered in Dresden, chorus members come from a local region and also reach out to adjoining counties in West Tennessee and West Kentucky. The backgrounds and professions of the amateur chorus members are as varied as one could imagine as are their musical abilities, but this eclectic group is bound together by a love of music and what it can do for those in the audience.

The idea of the choir came from Gail Dyer Jercinovich, general manager of the choir, during a steering committee planning session for Dresden High Project Graduation 98 – forming an alumni choir to be part of the event. Gail contacted the former choral director at Dresden High School, David Johnson, as well as former members of the choir under Mr. Johnson to see if there was any interest.

Fast forward after a successful reunion concert and the choral group opened up to auditions in the general public to insure the perpetuation of the chorus.  The rest is history.

The David Johnson Chorus performs locally as well as venues such as Washington, DC, The Biltmore, St. Jude, LeBonheur, The Baddour Center.....to name only a few.

A tag line of "Experience the Magic" is often found where DJC is publicized.  A very good description for the group's passion, musicality and mission. 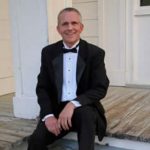 The David Johnson Chorus mission is to spread the magic of music to all.

The David Johnson Chorus is an auditioned commmunity chorus that began in 1997.