Where young women find their voices

The award-winning Young Women’s Choral Projects of San Francisco is a world-class choral organization for young women ages 5-18. Under the direction of Artistic Director Susan McMane, choristers from diverse backgrounds find their voices as singers, artists and women in a nurturing and joyful musical environment that empowers them to achieve artistic and personal excellence. YWCP creates high-quality choral music for the San Francisco Bay Area, the nation and the world.

Founded in 2012, the Young Women’s Choral Projects of San Francisco is recognized nationally and internationally as a world-class choral organization for girls and young women, ages 5-18. YWCP choristers are divided into five levels of choral training where they find their voices as singers, artists, and women in a nurturing environment that empowers them to achieve artistic and personal excellence.

Captivating sound, dynamic programming, sensitive artistry, and musical depth are words used to describe the Young Women’s Chorus of San Francisco, the premier ensemble of YWCP. Founded and conducted by Dr. Susan McMane, the Chorus has caught the attention of major arts organizations both here and abroad.
Recent activities include a debut performance at Carnegie Hall last June, concert tours to Slovenia, Austria and Hungary, a performance for the American Choral Directors Association Western Division conference in Pasadena, and performances with the London Philharmonic Orchestra, the San Francisco Symphony, and local professional groups Cappella SF and Sonos Handbell Ensemble.

Every year YWCP presents a concert series in the Bay Area and this season the premier chorus performs Arvo Pärt’s Te Deum with the Golden Gate Men’s Chorus and Ragnar Bohlin conducting, two holiday programs that feature a commission by David Conte for cellist Emil Miland and chorus, a Gala fundraising concert, and a June showcase concert with all four YWCP choruses entitled “Stronger Together.” In addition, during the 7th season, the Chorus sings three different programs with the San Francisco Symphony, as well as the premiere of a full-length opera, Abraham in Flames by Aleksandra Vrebalov, and embarks on a concert tour to South Africa.

Acclaimed in the American Record Guide as having “refined and beautifully controlled singing,” the Young Women’s Chorus has won many competitive awards including the American Prize in Choral Performance, the Dale Warland Singers Commission Award from Chorus America and American Composers Forum, and the ASCAP Adventurous Programming Award. The ensemble has shared the stage with renowned artists such as Jake Heggie, Frederica von Stade, Christine Brewer, Kronos Quartet, Kitka, Charles Dutoit, Esa-Pekka Salonen and others. Performing repertoire from early music to contemporary selections, the Chorus regularly commissions new works for young women’s voices from leading composers. 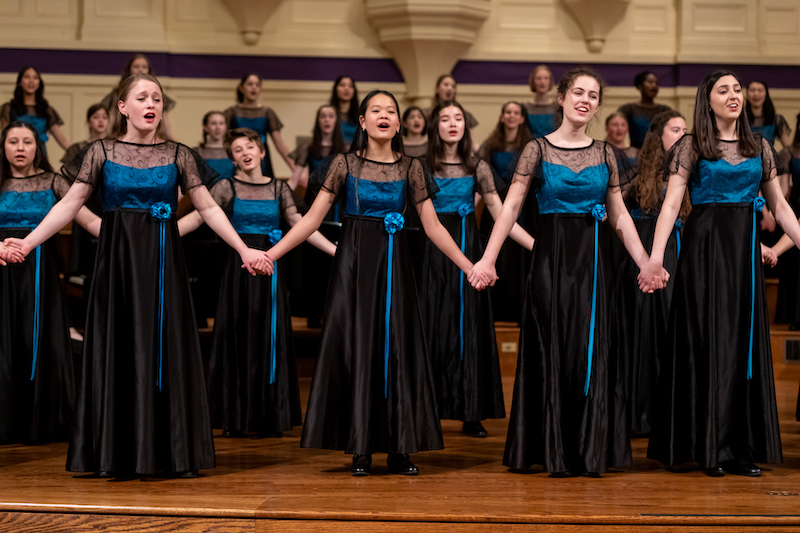 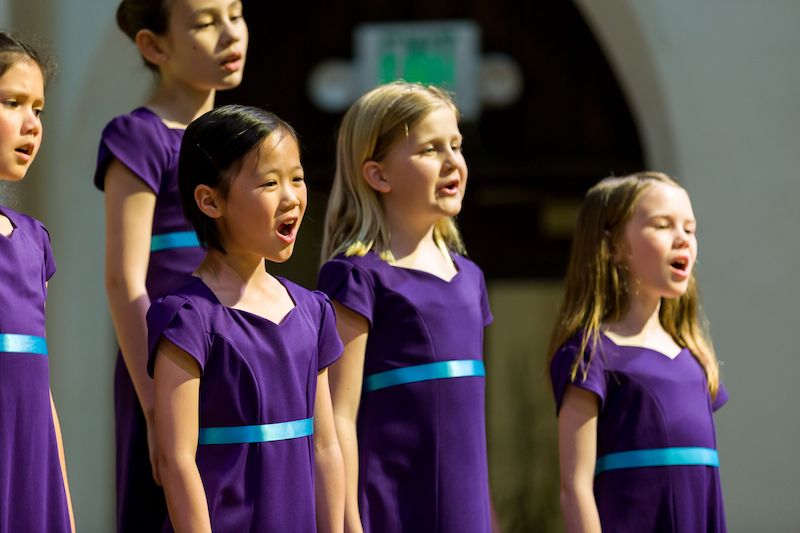 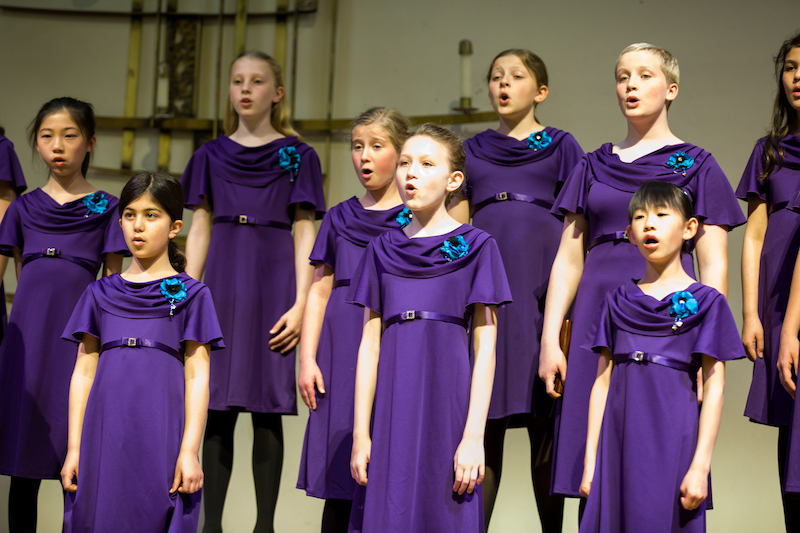 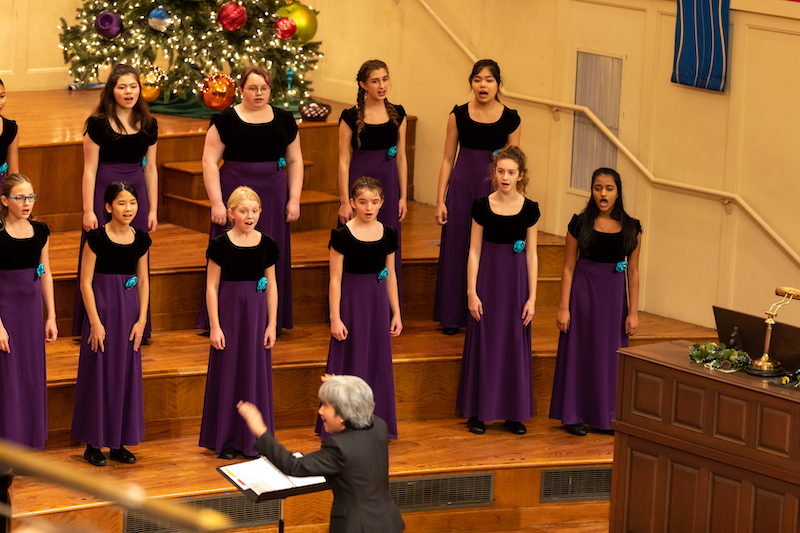 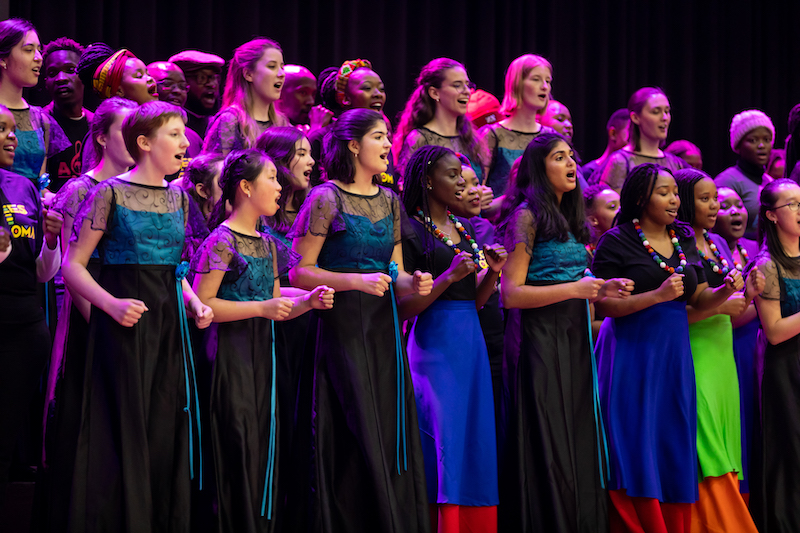 A singer in our training choirs is promoted to the next level based upon her musical growth during the year. Acceptance into the highest level, YWC, requires a successful audition in which the young woman demonstrates readiness for learning challenging repertoire, and performing with advanced vocal skill and professionalism.

YWCP offers four choir levels: Prelude Chorus, Allegro Chorus, Vivo Chorus and Young Women’s Chorus. Each level has its own curriculum and musical objectives. Based upon an audition, a singer is placed in a chorus appropriate for her age, vocal maturity and music reading ability. The grade levels are approximate markers, and some flexibility is given to certain situations. We also offer a non-auditioned class for girls in Kindergarten – 2nd grade, Arietta Singers.

A singer in our training choirs is promoted to the next level based upon her musical growth during the year. Acceptance into the highest level, YWC, requires a successful audition in which the young woman demonstrates readiness for learning challenging repertoire, and performing with advanced vocal skill and professionalism.

The mission of the Young Women’s Choral Projects of San Francisco is to transform the lives of young women through exceptional artistry in choral performance and bring the expressive power of their music to the community, the nation, and the world.

Through the Young Women’s Choral Projects of San Francisco, participants of richly diverse socio-ethnic backgrounds find their voices as singers, artist and women in a nurturing environment that empowers them to achieve artistic and personal excellence. The collaborative experience of high-quality music education and choral performance foster the development of each individual young woman and teach her important life skills.

Musae is a women's vocal ensemble based in San Francisco. The group takes its name from the original "ladies…

At the Oakland Youth Chorus, we celebrate and connect young people across cultural, geographic and…