One of Wales' most famous choirs!

The present choir was formed in 1965 by 13 men keen to see a revival of choral music in Dowlais, and that number rose to 120, reflecting the enthusiasm of the early days. Today the number of choristers registered is 45 and we are constantly looking to recruit new members, to ensure that the Welsh choral tradition lives on.

Over the years, the choir has travelled extensively to many countries, including America, Canada, Northern Cyprus, Holland, Bulgaria, Ireland and Italy. In April 2018 the choir joined with Côr Meibion Pontypridd Male Choir on a four day tour of Belgium and France to commemorate one hundred years since the end of the First World War, visiting and performing at the Tyne Cot War Cemetery, the Langemark Welsh War Memorial and the Menin Gate. The choir also had the privilege of performing for the people of Halluin, Lille at the Église Notre Dame des Fievres alongside local choir, Lyre Halluinoise.

It is believed the choir are unique in having had a taped recording taken into space by Canadian born astronaut Daffydd Rhys Williams in 1998, on his sixteen day mission aboard space shuttle Columbia, which orbited the earth 256 times covering 6.3 million miles.

The choir has made a number of television appearances and sung with a variety of famous names including Bryn Terfel, Katherine Jenkins, Haley Westenra, Donny Osmond, Wynne Evans, Rebecca Evans, Peter Karrie, (widely considered to be one of the best at portraying the role of Phantom in Phantom of the Opera) and Jason Howard, an ex-Dowlais Choir member, who in addition to his many opera roles in many parts of the world, has taken the lead role in South Pacific at the Barbican Theatre London and continued on a nationwide tour of the UK. Peter and Jason both hail from Merthyr Tydfil.

The choir has also had the honour of performing for and before Diana Princess of Wales and in 2010 had the privilege of singing for HRH The Prince of Wales and the Duchess of Cornwall when they attended the Armed Forces Day in Cardiff. 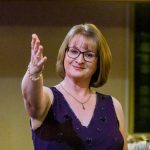 We are one of the oldest ladies choirs in South Wales, formed in 1947 we have performed at the Millenium…